A few years ago a friend of mine who’s an author said: “What a novelist really needs to write is a ‘what if’ story.”

He went on to explain that a novel which makes a reader sit up and take note and think ‘what if’ would be the type of book which would appeal to the masses.

I’ve never tried appealing to the masses, preferring to write what I wanted to write, as opposed to worrying about what might sell to a reader.

A Call to Heaven was different though. Because I didn’t come up with the idea at all; my mother did. And seeing as my mother (who sadly died six years ago) wasn’t able to tell me the idea in person, she came to me in a dream. In that dream she gave me the title for the book as well as its premise and then she kept repeating over and over: “You must remember this when you wake up.”

I did remember it when I woke up because it was an amazing idea and remembering that dream still gives me the shivers just thinking about it.

Amy is A Call to Heaven’s heroine and she too has recently lost her mother. What Amy finds herself in possession of (unlike me) is a phone with supernatural powers – a phone which allows her to call her mother in Heaven. Of course it’s about a lot more than that too. It’s about her abusive husband; it’s about a hot (skeptical) doctor she comes to know; it’s about a challenge she’s set from Heaven; it’s about love – love for a man (the hot doctor) and love for lost loved ones.

As I was writing the book I wished that my mother could teleport me a phone like Amy’s so that I could call her too. As I was working on the book, I realised that I’d finally written a ‘what if’ novel. I mean really…WHAT IF such a phone existed? WHAT IF we really could communicate with the deceased on the phone? WHAT IF we could prove there was a Heaven and we could connect with those in it? How amazing would that be? Or, if you were skeptical hot doctor Daniel, you might not think that would be so amazing after all…

Is there anyone you’ve loved and lost and wish more than anything that you could speak to them again?

To return to Jo's website please click on the link below:
www.jokessel.com
Posted by GO WITH JO at 01:36 No comments:

WIN A PRIZE AS PART OF MY BOOK TOUR GIVEAWAY

It's been busy, busy, busy here with the release of my new novel A Call to Heaven. 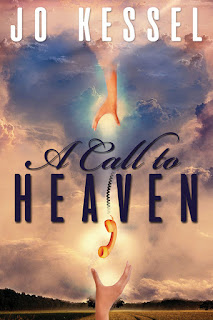 The reviews are coming in thick and fast and they are all FIVE STAR I'm thrilled to report.

This is what Shannon said on Amazon.com:

This book. Man.I have lost a lot of humans that are close to me. So, naturally I'm drawn to stuff like this. This particular book hit me in the guts. There were parts that made my heart pound, and rather than leisurely lay down to read, I was sitting and tapping my foot in anticipation of the scene unfolding. There's very specific scenes this happened with for me - but I don't want to ruin the book for those who haven't read it yet, so I'll just say - you'll know them when you get to them!I enjoyed the story so very much, and felt sad that it ended. I guess for me that's how I know if a book is "great". I grieve the characters as the book comes to a close. I felt that with this one.I sure wish I could get my hands on that phone. I have several people I'd like to hear it ring from. What a blessing that would be for all of us!Highly recommend this one!

And this is what Laurie said on Goodreads:

This a perfect read for anyone who ever has "wished" to have a last conversation with a loved one who has died. The feelings of each character in the book as they struggle with their grief is so real. The main character "Amy" who has to contend with an abusive home and an unexpected loss as she perseveres, picks herself up and puts one foot forward to regain her life and help others-with the help of an old phone. It left me thinking and wishing I had a phone like this very special one. I loved this book.

Good luck and have a great weekend.

Have I always believed in the paranormal?

When I started out in my journalistic career I was a TV Researcher on a paranormal show and as part of my research I had to interview psychics. I spoke to three psychics (each one in private) and all three of them asked me the same question: “Do you have twins?”  Two of them followed that question by saying: “I’m seeing a boy and a girl.” I hadn't yet had any children at the time and remember thinking that all these psychics weren't very psychic at all. BUT...forward-wind a few years and I gave birth to my first child. Or should I say children. Because it was twins – a boy and a girl! Do you think those psychics had actually been able to read my future?

I went on to work on several paranormal TV shows over the years and witnessed quite a few weird and unexplainable phenomenon – including being with the infamous Israeli spoon-bender Uri Geller, who frequently bent spoons in my presence. In fact, spoons bent whether he was holding them or not! It was the spookiest thing and, honestly, I didn't see any way/how any trickery/fraud was coming into play.

The spookiness was soon to become more personal, however. For part of my research I read all Uri Geller’s autobiographies. In one of them was a section entitled: How you can bend a spoon with the power of your mind. It was a five-part process, which included:
a. getting the spoon
b. closing your eyes and holding the end of the spoon between your thumb and index finger
c. thinking from your head down to your fingers and demanding the metal spoon to bend
d. concentrating harder
e. concentrating even harder.

I did all those things. I concentrated and then suddenly I felt the spoon burn between my fingers and dropped it to the floor. When I went to pick it up I was MORE SHOCKED THAN I HAVE EVER BEEN BEFORE OR SINCE IN MY LIFE. The spoon had bent over double. And I was the one responsible for making it do so.

Ever since, not only do I believe in the paranormal, I believe that ALL of us possess some of these powers, only it's a power which is untapped.

The novel I've just written - A Call to Heaven - is also based on a paranormal premise, because sometimes it's nice to believe that the extraordinary really can happen...

Please click on the link below to return to Jo's website:
www.jokessel.com
Posted by GO WITH JO at 03:38 No comments: