WHY I PRAY THE UK VOTES TO REMAIN IN THE EU!

OMG - I can't believe the day has finally arrived! Today the UK votes in the referendum on whether to stay in or leave the European Union. For me, the decision was easy. In fact, to date I have never been as politically passionate or motivated by something as I am by this. In fact, I couldn't wait to cast my vote! 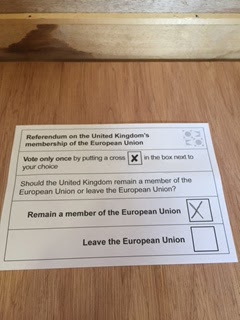 After school I read Law with French at Sussex University. The reason I chose that course is because it combined the minimum of law together with European Studies, and it was the latter (and the French!) which was really enjoyable. I learned all about the EU - about why it was formed, which countries started it. And what makes me so sad is that the reasons for its beginnings are being forgotten in this whole heated debate. The European Union was created after the Second World War and the reason it was created was to provide a PEACEFUL union for all countries involved. It was to prevent a World War Three; it was to create a peaceful world; and in that respect it has been HUGELY SUCCESSFUL!
All the 'Leave' campaign's arguments (which I disagree with by the way) about an improved economy, more jobs etc don't even bother me. Even if they were right, it's irrelevant. What matters is that we stand together. United we are strong. Isolated we are weak.
I have told my children that I don't want to live in a UK that isn't part of the EU. I consider myself European. I have studied in Belgium. I have lived and worked in France. I travel constantly across Europe. I enjoy that freedom and don't want it to stop. I'm now just praying that the majority of my fellow countrymen and women feel the same way. I don't want to have to leave my country. I would like to stay here. But only if it's a Britain that stays in Europe.
Deep breath.
Fingers crossed.

To return to Jo's website, please click on the link below:
www.jokessel.com
Posted by GO WITH JO at 02:22 No comments: