A few weeks ago I took the brood on a fabulous Mediterranean cruise - a round-trip from Barcelona.
* FIRST STOP was Villefranche (where Madonna holidayed this summer with her toyboy whilst she filmed the movie she's currently directing about Wallis Simpson - the American divorcee who caused Prince Edward V111 to abdicate and never became King. Did we see Madonna?
*SECOND STOP was La Spezia, Italy, gateway to five remote car-free fishing villages linked by walking trails.
*THIRD STOP - Rome
* LAST STOP - Pompeii

We had an AMAZING time and you can not only read all about it by clicking on the link below, there's a fabulous short video of our time on board - truly hilarious and uplifting - taking a peek is COMPULSORY viewing..........:
http://www.telegraph.co.uk/travel/travelvideo/10377630/Disney-cruise-Mickey-Mouse-in-the-Mediterranean.html

And this reviewer loved Weak at the Knees so much she's demanding a sequel!


Click on the link below to return to Jo's website:
www.jokessel.com
Posted by GO WITH JO at 04:10 No comments:

A lovely review - and last chance to win!

Click on the link below for the most absolutely lovely review of Weak at the Knees and the last chance to win a simply fabulous French goodie basket.............


Oh, and the goodie basket includes a glorious bottle of the French red wine Chateauneuf-du-Pape - which can be mailed internationally, so why not enter NOW?! 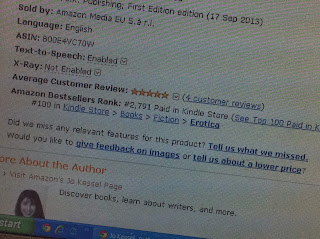 Please click on the link below to return to Jo's website:
www.jokessel.com
Posted by GO WITH JO at 03:11 No comments:

My first national newspaper review in The Sun

I am beyond excited. My new book Weak at the Knees has been reviewed in the UK's most popular newspaper The Sun today. Four out of Five stars - Check it out! Even Bridget Jones didn't get a look-in in today's paper! 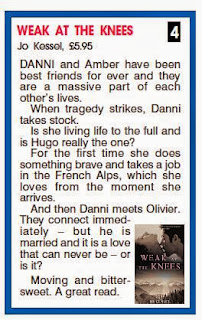 To return to Jo's website please click on the link below:
www.jokessel.com
Posted by GO WITH JO at 03:16 No comments:

Weak at the Knees PLAYLIST

Someone to Watch Over Me, Ella Fitzgerald
Viva la Vida, Coldplay
Abbey Road, The Beatles
What makes you beautiful, One Direction
Troublemaker, Olly Murs
I dreamed a dream, Susan Boyle
Kissing a Fool, Michael Bublé
Joe le taxi, Vanessa Paradis
Fix You, Coldplay
Boogie Woogie,
The Best of Abba, Abba - Take a Chance on Me, The Winner Takes it All, Mamma Mia, Gimme!Gimme!Gimme, Thank you for the Music
Non, je ne regrette rien, Edith Piaf


Rolling in the Deep, Adele

Click on the link below to return to Jo's website:
www.jokessel.com
Posted by GO WITH JO at 02:41 No comments:

I have been meaning to write this for a while, but my blog went down and it now feels a little bit belated, but nonetheless, this was something I really wanted to say - and better late than never.
I was so so saddened when I heard of Sir David's passing. My first ever job in television, nearly twenty years ago, was as a Researcher on a program he was presenting called (surprise surprise!) 'The Frost Program'. It was a one-hour show for ITV which blended his two fortes - part in-depth celebrity interview, part audience-fueled topical debate.
I remember being so nervous when I met him for the first time - but I needn't have been. He instantly made me feel at ease and part of the posse - at the dreaded 'ideas' meeting (where the production team had to come up with ideas for the next week's show) he never once ridiculed anyone's ideas. All the team felt valued. We all felt equal - and that was down to him. And thanks to him we had (and I got to meet) some of the most exciting names in showbiz who came onto the show to be interviewed - how I wish I'd had personal access to his 'little black book'! Sir Anthony Hopkins, Eric Clapton, Andrew Lloyd Webber, George Michael, Michael Palin......they were all in his book, and they all, among others, appeared on the show.
On being interviewed a few years ago, Sir David said: "the moment I walked into a TV studio, it felt like home."
I know what he means. That's how I felt the first time I set foot in a studio with him, and despite the fact that I now mainly work as a print journalist/writer, I never feel more at home than when I'm in a TV studio or in front of a camera. It's in my blood. And it was most definitely in his.
Not only did Sir David present these shows, he owned the television production company which MADE them - David Paradine Productions. I carried on working with him for six years, on a range of programs from factual to paranormal (yes, we made a couple of live shows which featured spoon-bender Uri Geller) as well as some BBC documentaries. It was the grounding for my career and I've always thought of Sir David so fondly.
I can still smell his cigars (he was a big Cuban cigar smoker), I can still hear his laugh - it was utterly infectious. And I have never heard him laugh so much as when, at one of the ideas meetings, the script-writer mentioned the shenanigans of the night before. After the show, over a glass of bubbly in the green room, one of that nights' guests (an English comedian who shall remain nameless!) invited me up to his dressing room. I never went of course, but Sir David (not to mention the rest of the crew) found the whole story hilarious. I have never blushed so puce in my life.
Eventually I moved on and started working in front of the camera myself, but I have never forgotten David, and according to a good friend of mine who works at BBC Radio, Sir David never forgot me either. He had an uncanny way of remembering everyone and only having good things to say about everyone he knew - what a truly special person he was.
That friend of mine who works for BBC Radio forwarded me this article, which captures the very essence of the man:
http://www.theguardian.com/media/2013/sep/01/david-frost-michael-grade-appreciation

Sir David loved and was so proud of his three boys and since losing my own mother recently (in not dissimilar overnight/unexpected circumstances) I can only empathize with both the boys and his wife.
I never imagined that I would never see him again, but he will forever be in my thoughts.
He was a very special man.

Please click on the link below to return to Jo's website:
www.jokessel.com
Posted by GO WITH JO at 01:50 No comments:

I've a new virtual book tour starting today in America. There's an awesome tour-wide prize of $100.00 Amazon vouchers as well as some French goodies which include a divine bottle of Chateauneuf-du-Pape wine. The prize is open internationally, so please do enter:

Happy Reading and please do follow me on all my tour stops - there are a lot of VERY revealing blog posts coming up!

Please click on the link below to return to Jo's website:
www.jokessel.com
Posted by GO WITH JO at 03:14 No comments: