San Diego, California - we want to live there!

I recently took my children on a research trip to San Diego, California. I wanted to part-set my new novel (called Now is our Time and releasing in September 2014) in the US and I picked San Diego because it's one of those places which when people visit, they come back and rave about. Was their raving justified?? Heck, yes!! We all fell in love with San Diego. There is just so much to do there. The tourist board boasts that it has seventy miles of golden coastline, and it really does. We didn't check out all seventy miles of it, but we did check out Mission Beach - where scenes from Top Gun were filmed! First we cycled along the boardwalk: 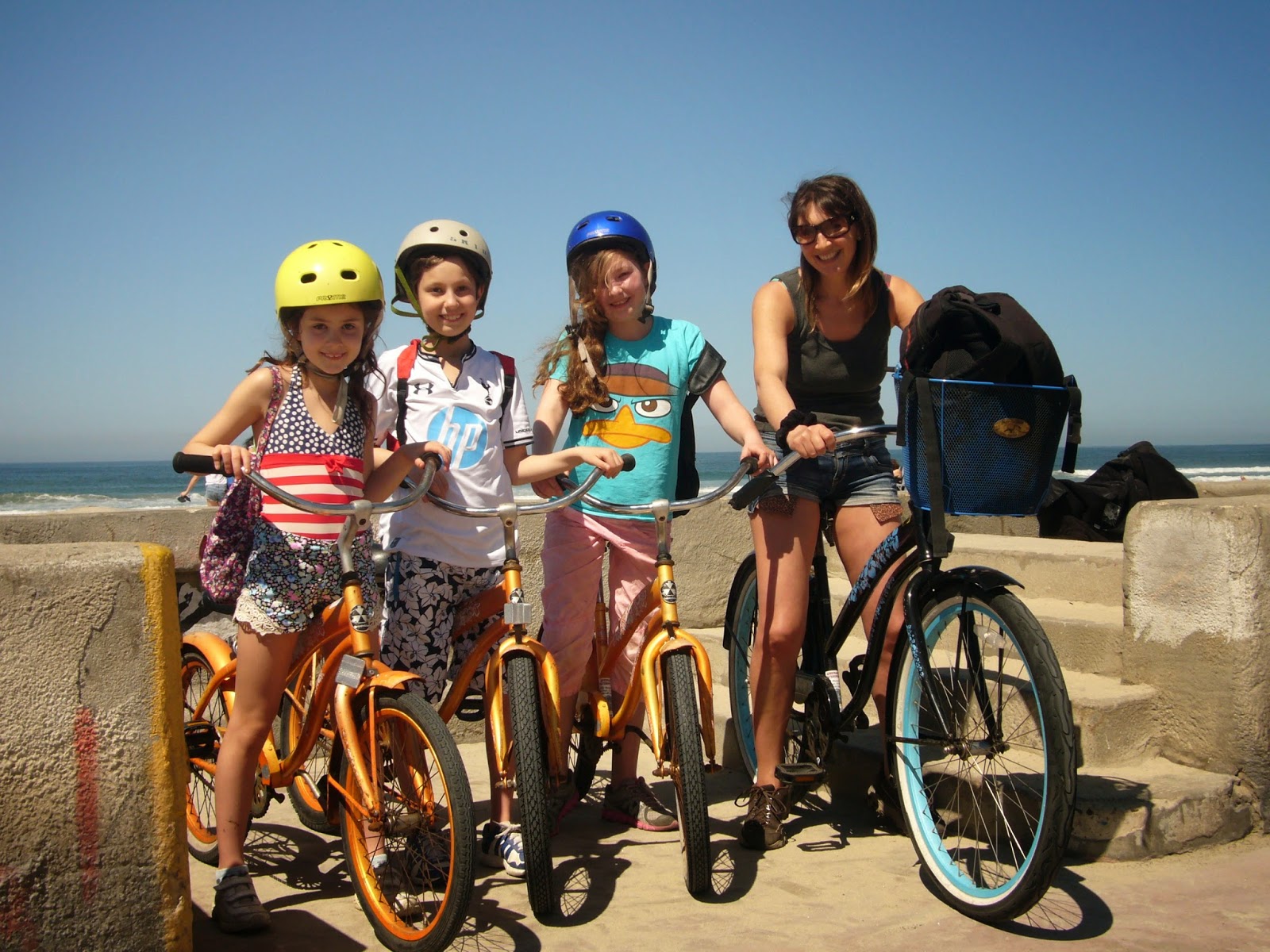 This was a lot of fun and the cycle trail winds for miles along the coast and is a great place to watch surfers crash and burn in the foam - or to successfully ride the waves! Sorry, I'm not a surfer, so I don't know the jargon. But my children did try their hand at body-surfing later on that day and absolutely loved it! 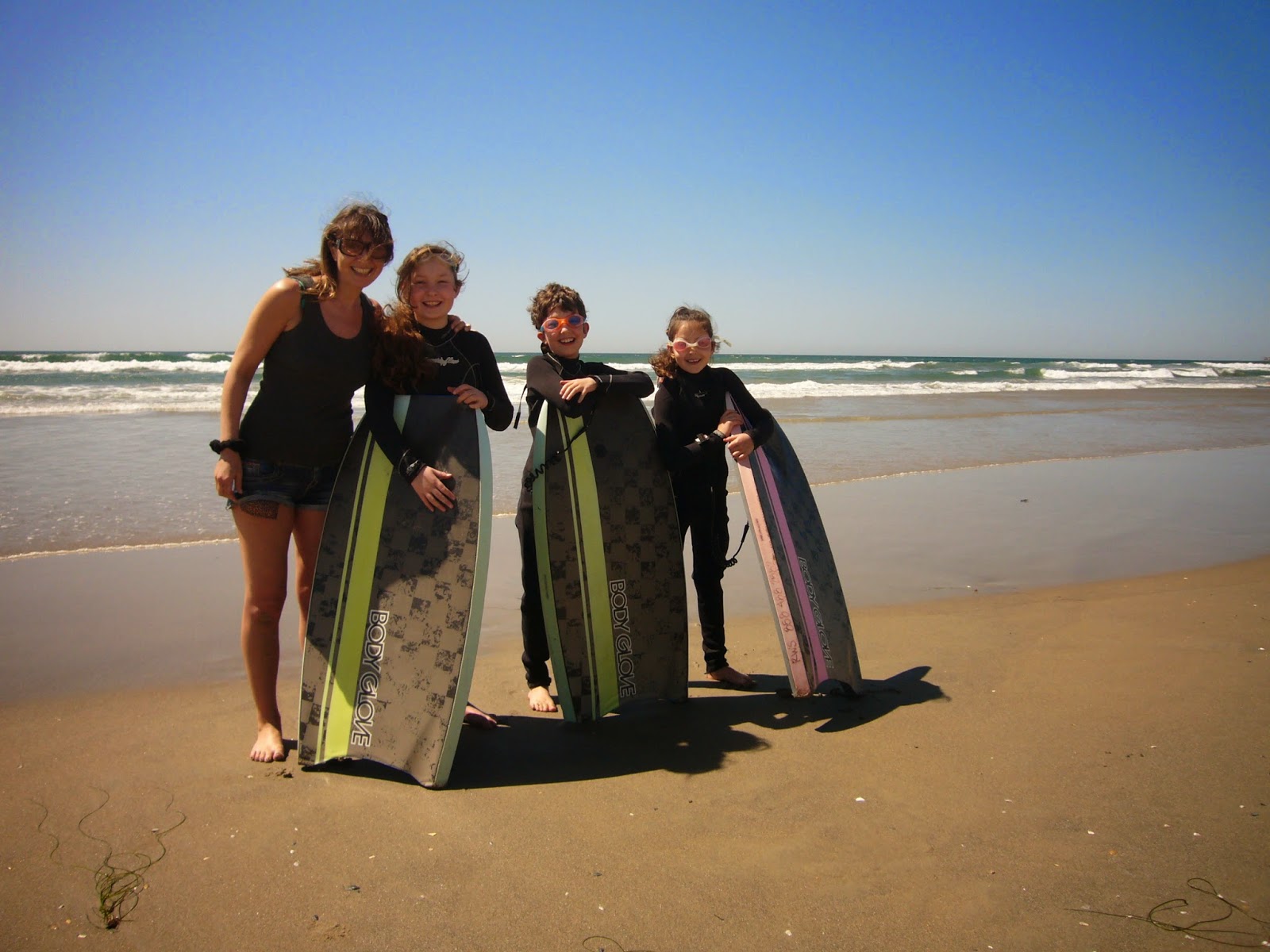 As you can see, Mum didn't bother to get wet, but preferred to watch them from a horizontal position as she lay in the sand in the sun! But they couldn't get enough.......... 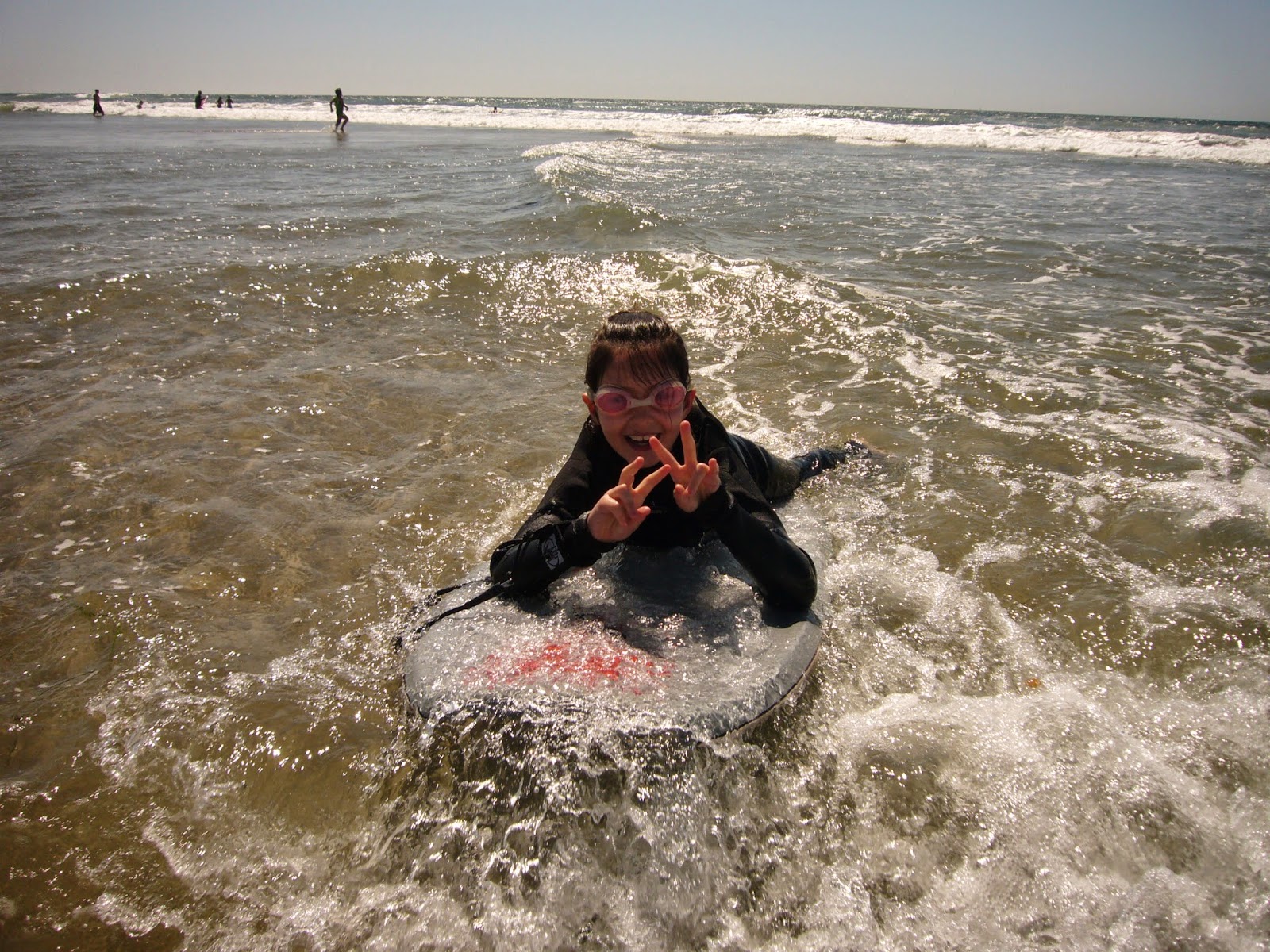 and I really couldn't get them out of the water. 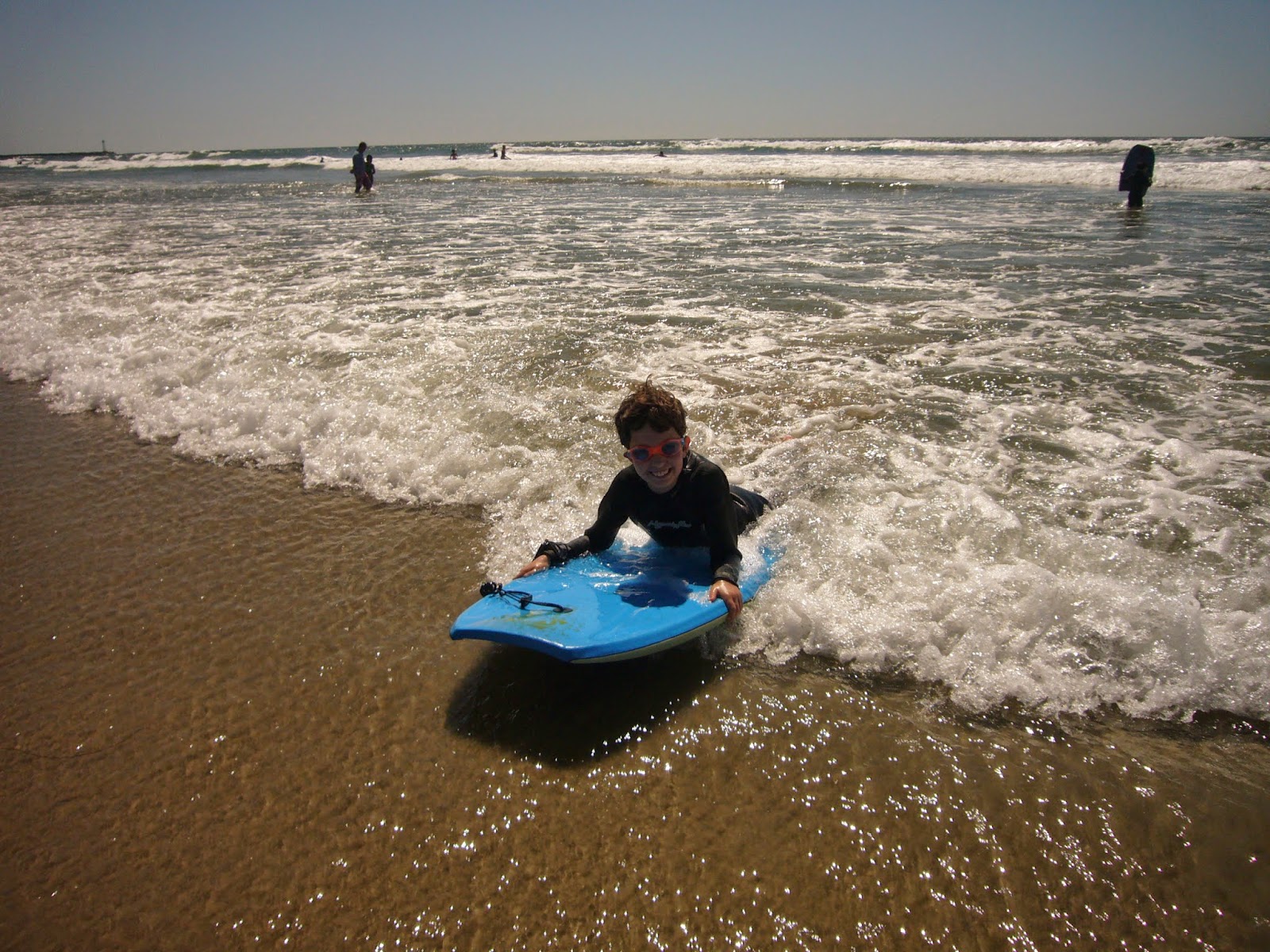 There's the cafe nearby where Tom Cruise chatted up Kelly McGillis in Top Gun. And also, Baywatch was apparently filmed on Mission Beach............it really is California at its finest. We were at a hotel called the Bahia Resort which is also conveniently close to SeaWorld.
Later in our stay we relocated to Del Mar, which is a seaside resort north of San Diego, which was fabulous and chi chi and also has fabulous beaches. I love a long beach walk, and often my children whine as they accompany me, but here there was lots to keep them amused - from trying to dodge the waves in little coves as the tide came in, to finding seaweed on the beach which resembled microphones: 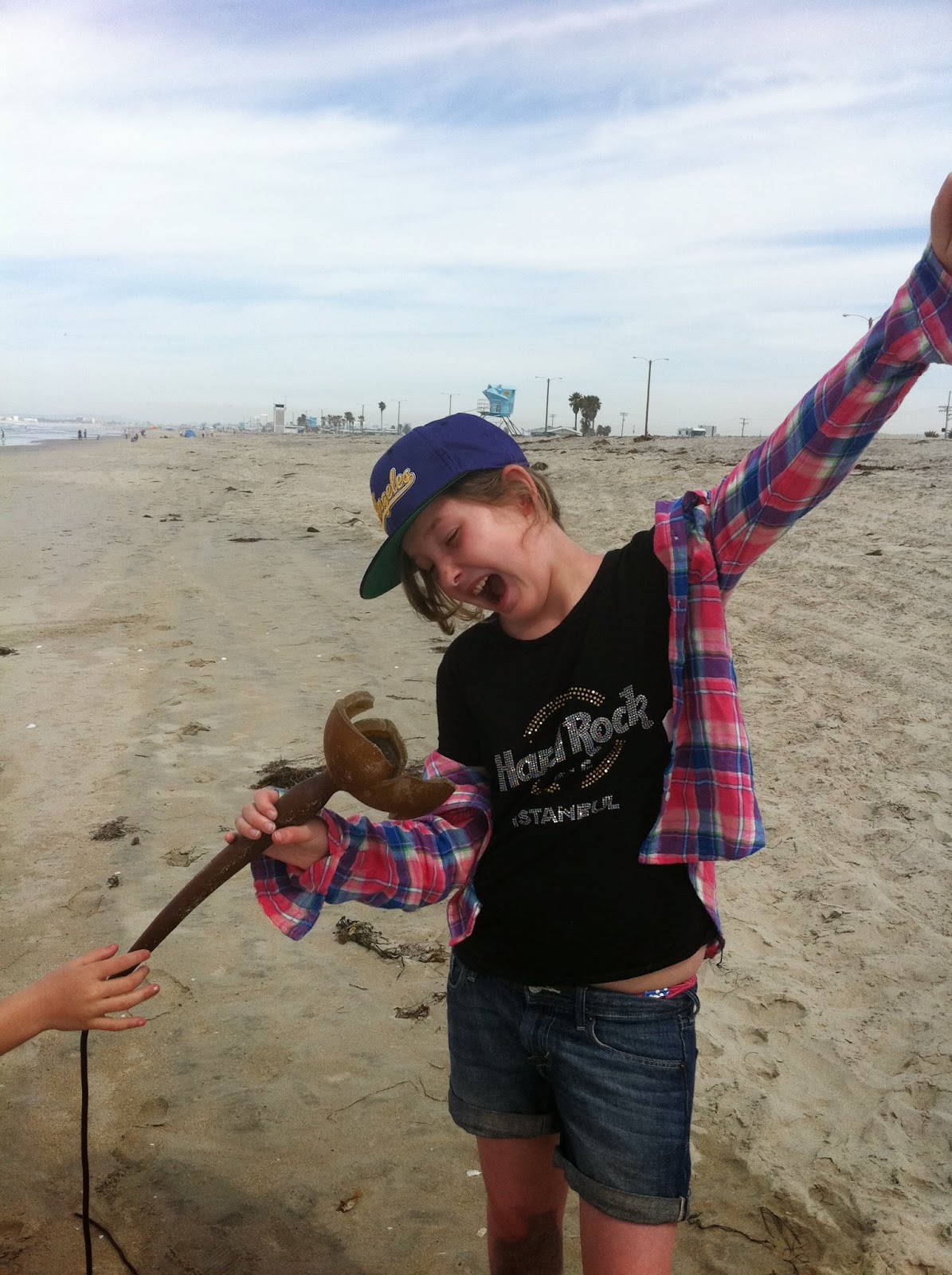 A rock star in the making!
There's so much to do in and around San Diego, that is, when you're not chilling out on the beach or by a pool. There's the world famous zoo: 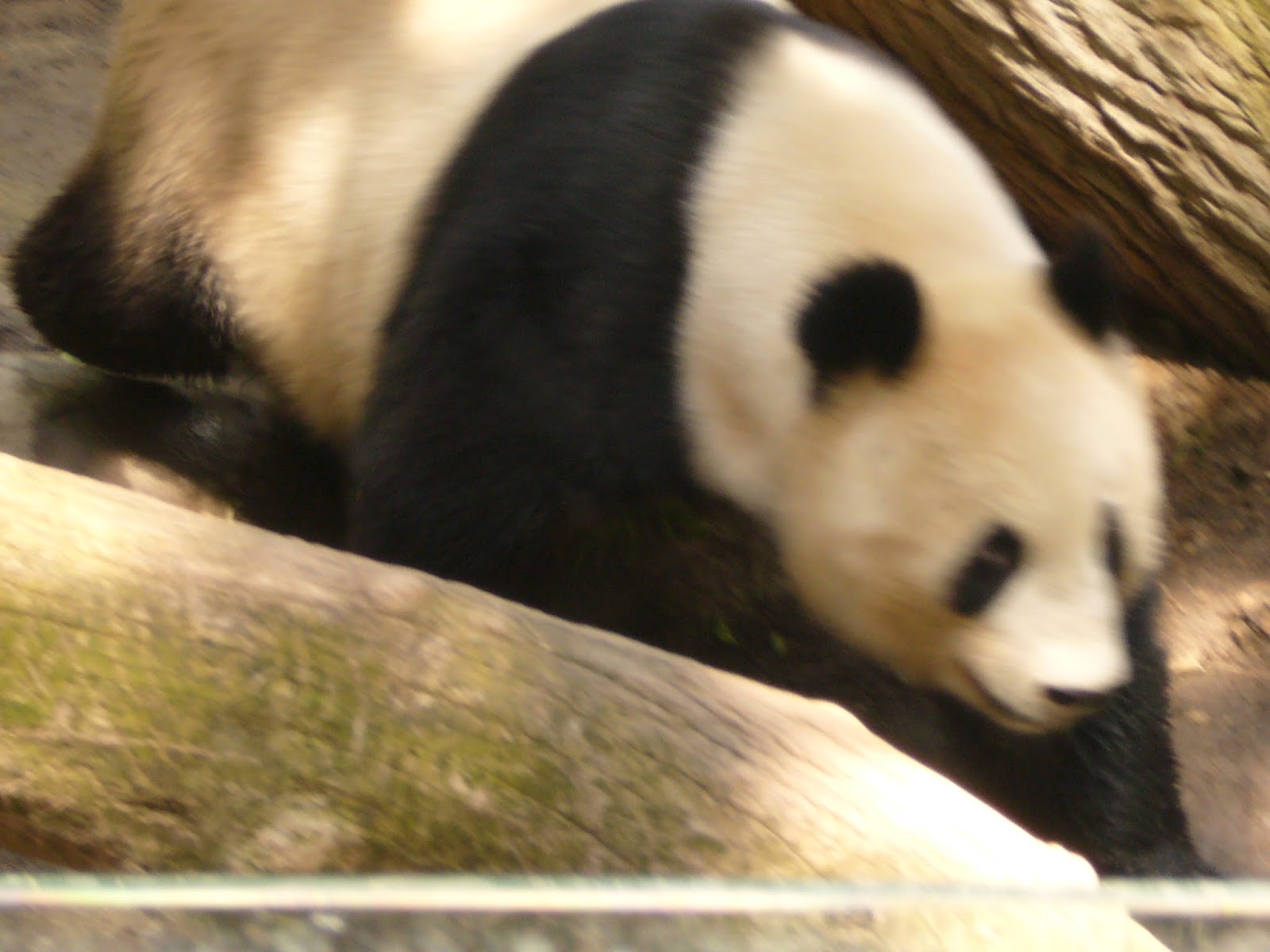 The giant black and white pandas are a star attraction, but we loved the koalas and polar bears even more! The site is vast, so a bit of downtime is always in order: And the zoo's sister park, the San Diego Zoo Safari Park, set about 40 minutes inland (a hire car is essential for getting around) was even better. Animals roam free here, as they would on the plains in Asia and Africa, plus there is a massive zip line there for adrenaline junkies. It was too windy for the zip line to operate the day we were there, but there was this amazing jungle high ropes course which the children absolutely LOVED!! This isn't a great picture, but it gives the idea: 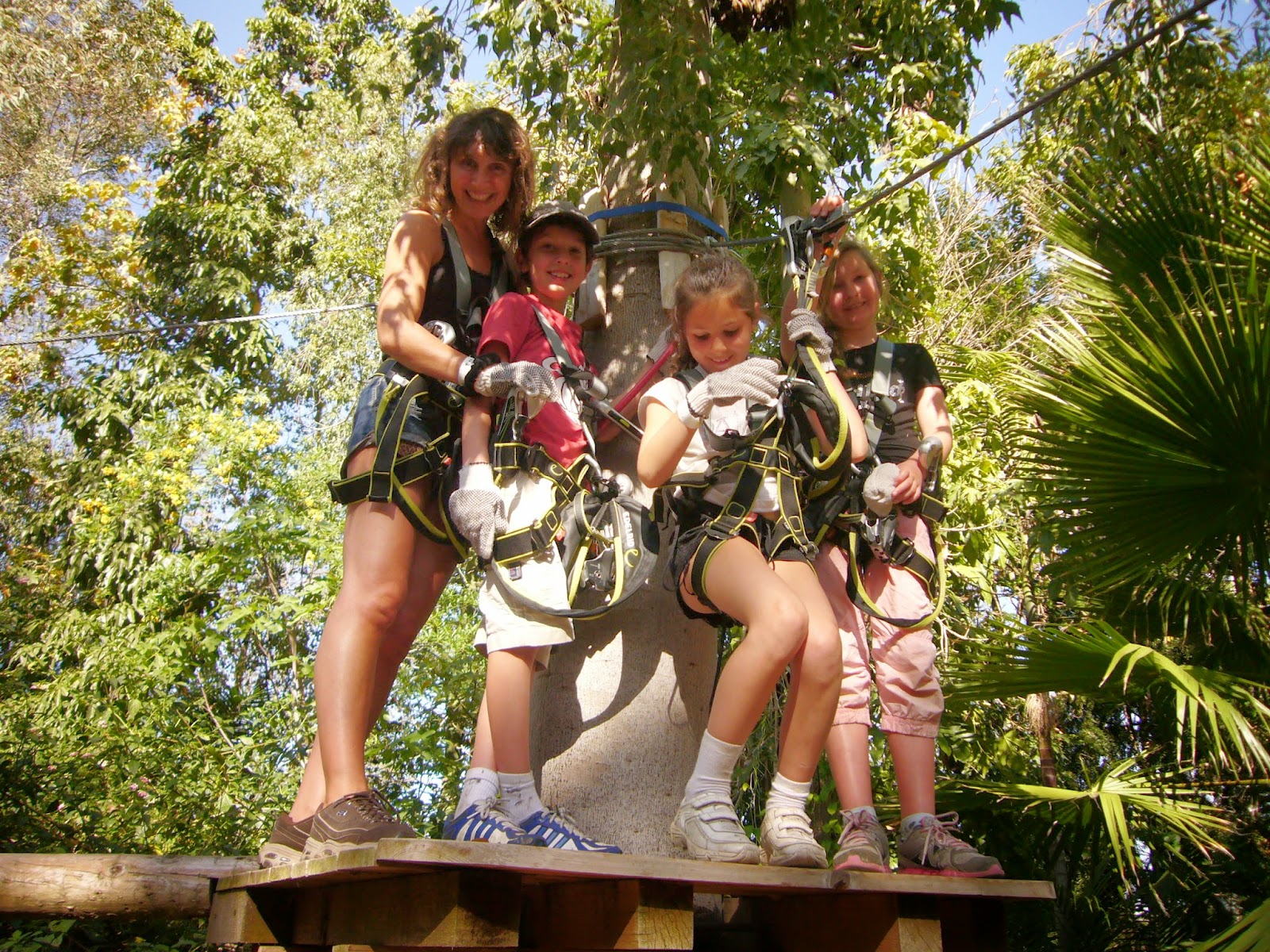 And whilst we were there, we saw a temporary butterfly exhibition (my youngest daughter is crazy about butterflies). Their colouring was extraordinary and some of them even landed on us. See if you can spot them! 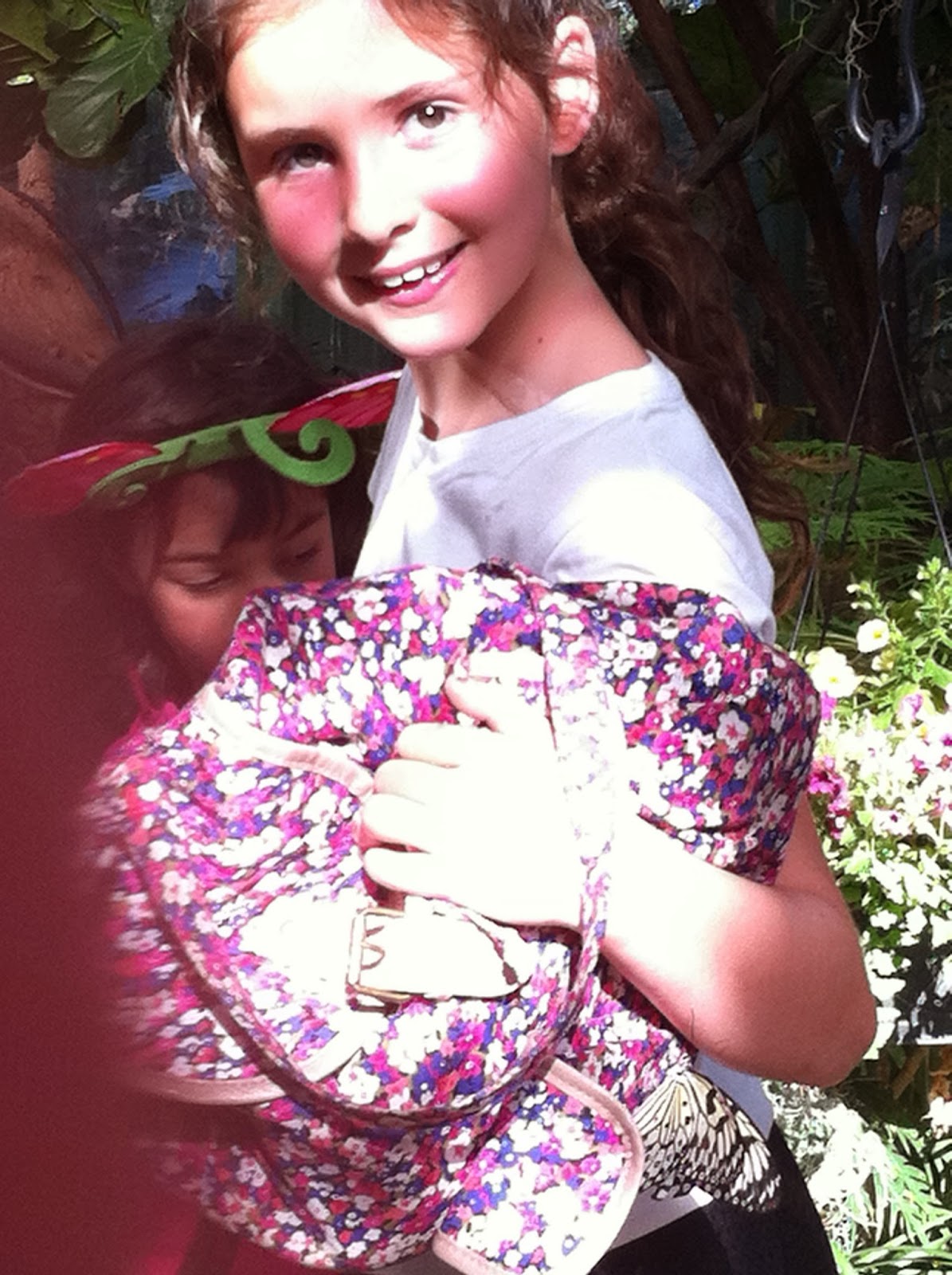 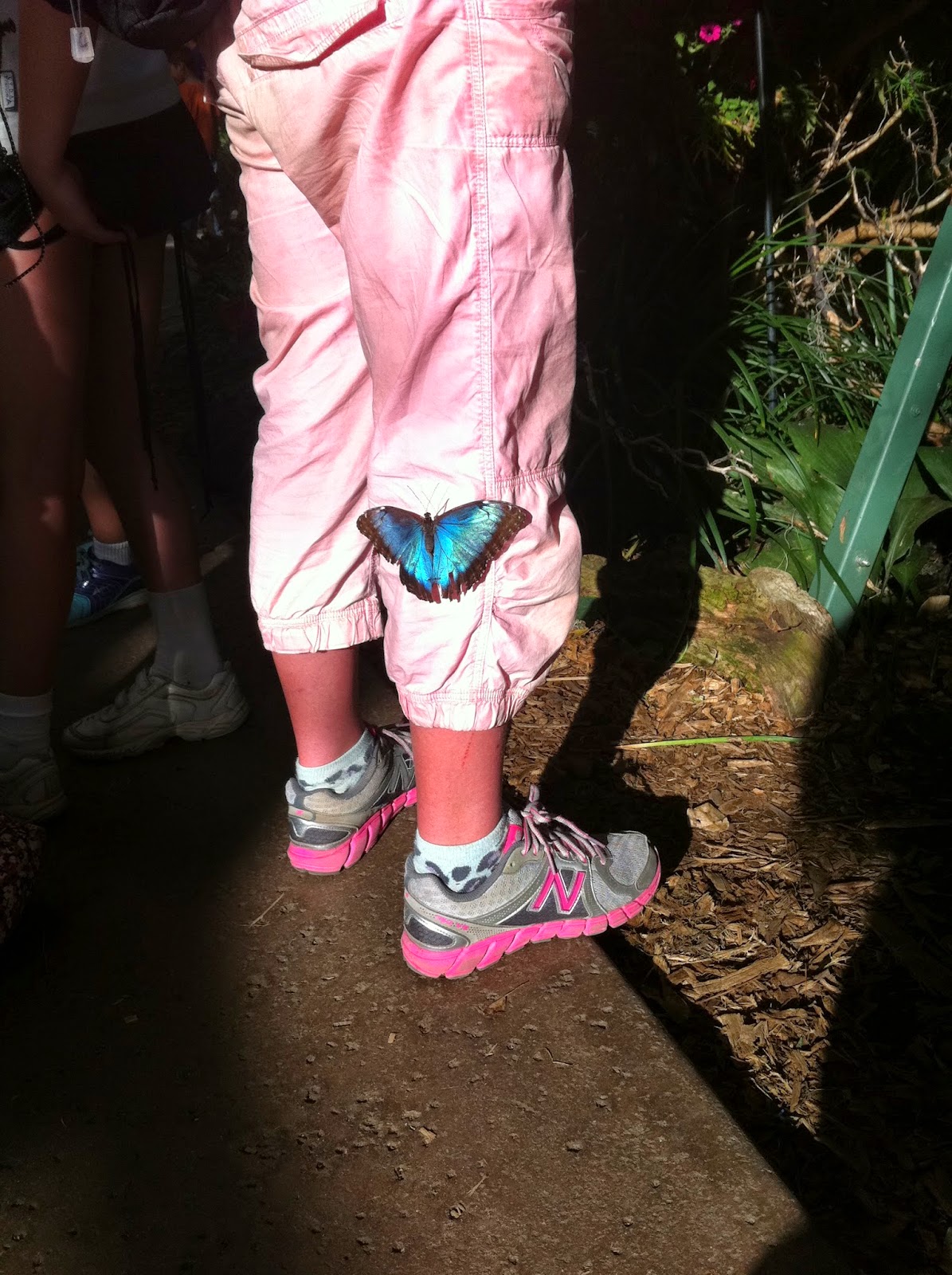 We also stayed for a while on Coronado Island (which isn't a real island, but just looks that way because a 2 mile long bridge attaches it to the mainland) and that was a fun place to stay. There's an amazing hotel there called the Hotel Del Coronado - we didn't stay there because it was too expensive, but we went to visit and had an amazing dinner at one of its many restaurants called Sheerwater. Anyway, the hotel building itself is extraordinary. It's got all these red fairytale turrets and is apparently what inspired the author of the Wizard of Oz to create the Emerald City. The film Some Like it Hot, starring Marilyn Monroe, was also filmed here......
As I'm writing this, I'm wishing I was back in San Diego. Yes, I love London, but there's a way of living, an easy, outdoor lifestyle about California, which we just couldn't get enough of. Oh well, I'll just have to start saving up for the next trip. If only the long haul flights weren't so expensive!!
Hope you enjoyed this and happy travelling!

Click on the link below to return to Jo's website:
www.jokessel.com
Posted by GO WITH JO at 03:44 No comments:

New man in my life....met him at SeaWorld, California!

I recently got back from a research trip to San Diego, California, where my new novel (coming out in September) will be set. I took the kids and wow, did we have a great time. Nobody wanted to come home. In fact, San Diego was such an awesome place that we all decided it would be the perfect place to live and nobody wanted to come home.
We did so much great stuff (will write more in another post) but SeaWorld topped the list. Days don't come much better than the one we spent there and best of all, we got to take part in a special dolphin interraction program which was amazing.
Meet the new man in my life. He's called Toby and was the best kisser! 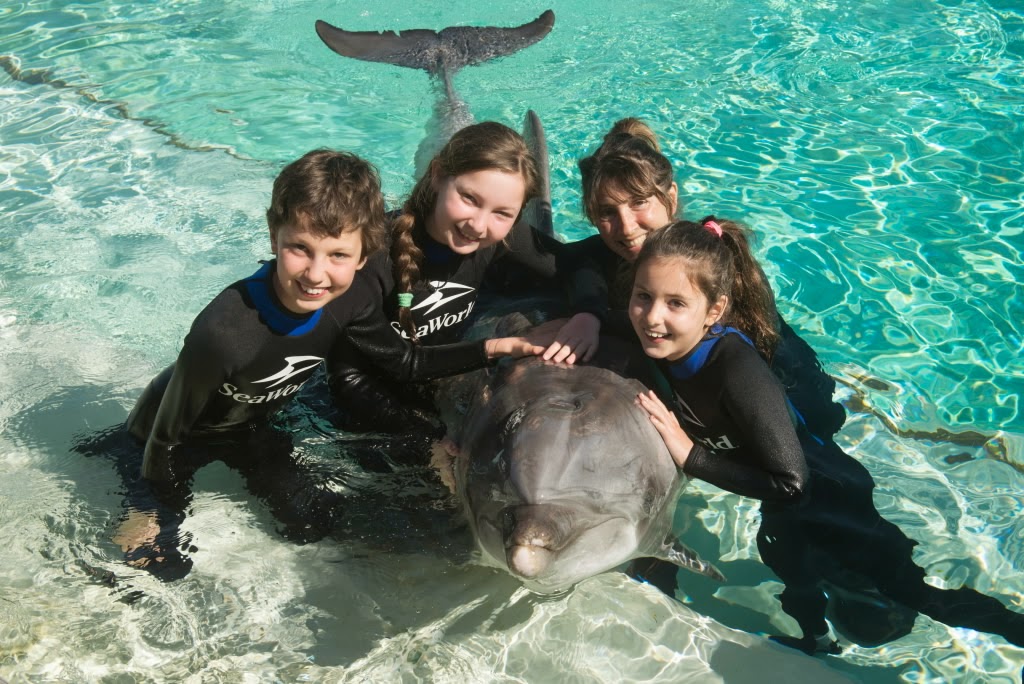 And we all got taken on rides by him too....one of the most memorable things we've ever, ever done. Not only did we swim with dolphins, we touched sharks, saw penguins galore, watched a couple of magnificent shows - one with legendary Shamu, the Killer Whale, but our favourite was Pet's Rule!, a show which starred a load of domestic pets performing the cutest of stunts. And of course, there were the rides. I normally hate roller coasters and while there were a couple which I let the children ride alone (after I'd tried it out once) there were some tremendous watery rides which I couldn't get enough of. Journey to Atlantis was one of them, which ended in a near vertical drop and a mega splash!! 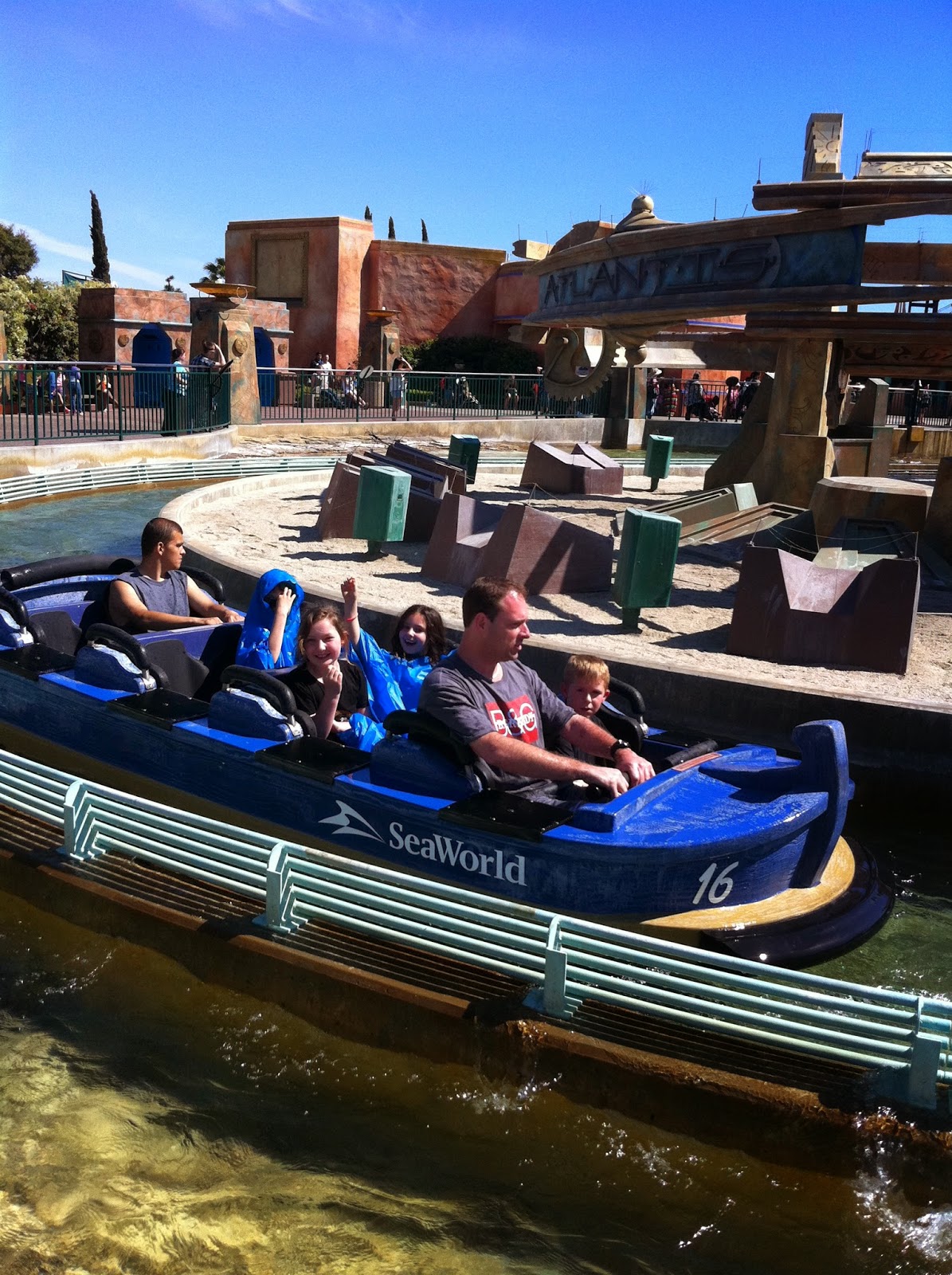 This photo was taken of my children before they wound up to the vertical drop, and they were having such fun that I did it another three times with them afterwards! 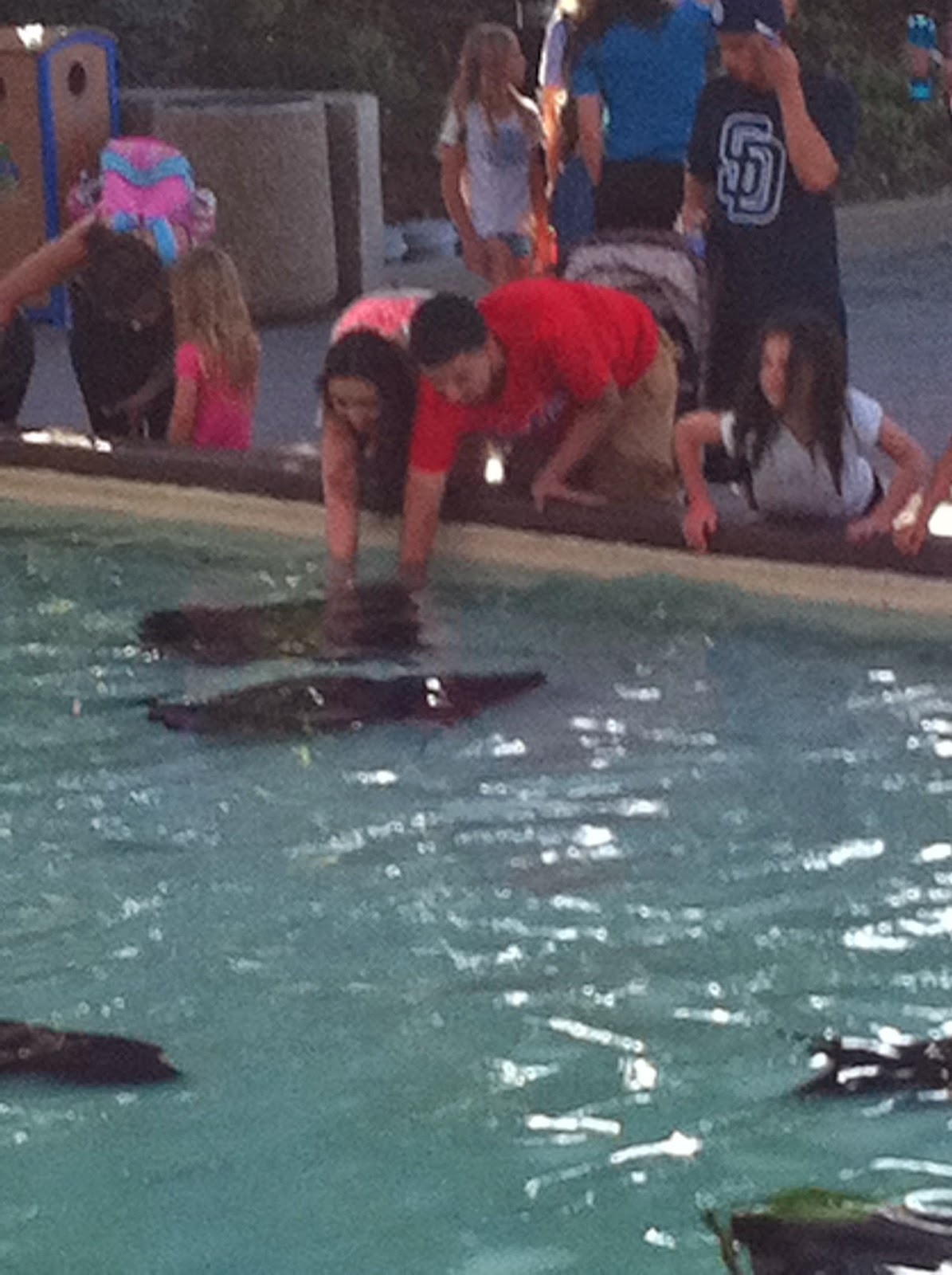 I think these were ray fish, which my daughter was trying, and later succeeded in touching. Seriously, I could NOT get my children to leave the park. We arrived before it even opened and we were some of the very last people to leave - that's how good it was!

If you haven't yet been to SeaWorld, then I cannot rate it highly enough. My children have been lucky enough to accompany me on many of my travel trips as a journalist, and SeaWorld would definitely rank in their (and mine) top five things to do.

Click on the link below to return to Jo's website:
www.jokessel.com
Posted by GO WITH JO at 03:04 No comments: