INTRODUCING THE NEW MAN IN MY LIFE - JERALD, THE RAGDOLL CAT!

Honestly, I never, EVER wanted any pet.

But this is how it happened.
My daughter wanted a pet.
I got her a hamster.
She loved and looked after that hamster beautifully, all by herself.
Then the hamster died.
So I bought her another one.
The same thing happened: she loved, she looked after and eventually the hamster died of old age.
Then she wanted another pet - but not a hamster.
Rabbits and guinea pigs are too hard to look after.
Dogs require too much walking and looking after.
And so we decided on a cat.
Why a ragdoll?
I heard that they love cuddles, people and being handled, all things that I knew my daughter would want in a pet.
I still didn't want one, but then I met Jerald. 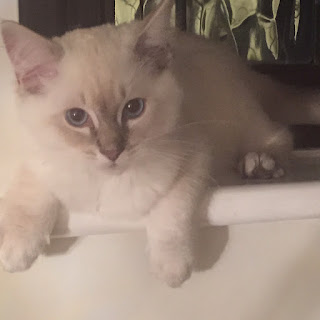 And I fell in love.
Aren't ragdolls the just the cutest?! It's like having another baby in the house.
He's cheeky and fun and loves to play: 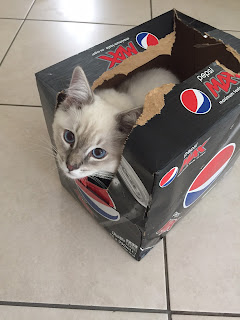 With empty boxes of any kind!
In the box below he's wondering if he's 'free range' or organic!! 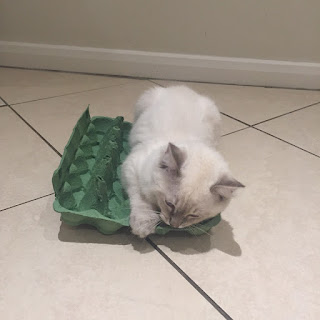 He is officially the new man in my life and particularly likes my bed! 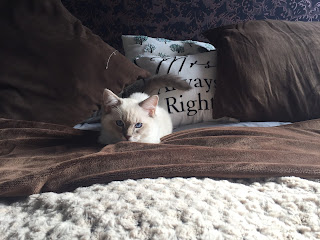 And recently he got in the way of my filming, but I didn't have the heart to cut him out because he looked so cute. So if you want to see him in action, check through to the end of this video to watch him make his first cameo appearance. Tell me if you can't take your eyes off him?!
https://www.youtube.com/watch?v=wiAMnGuWhd8

Happy viewing!
And if you want to return to Jo's website
Please click the link below:
www.jokessel.com

Sorry for my absence, but I've been busy travelling - this time to Peru! A film of this adventure can be seen on my new YouTube channel Go with Jo: https://www.youtube.com/watch?v=MrkX6l6PvLI

I’d been wanting to go there for ages, but because my husband had already travelled there pre-me (he walked the Inca Trail) he kept choosing to explore countries new to him. And so it was that I came up with another plan – to take my adventurous thirteen-year-old son Gabriel with me there instead. Not only was Gabriel up for it, he was ecstatic at the notion.

My dream was to visit Machu Picchu, but my son was keen to explore the jungle and eventually we decided upon a week-long itinerary which incorporated the two. A quick overnight in Lima staying at the J W Marriott Hotel gave us enough time to explore the capital’s chic, trendy Miraflores district before hopping on an internal flight to Puerto Madonaldo, gateway to the Amazon jungle. 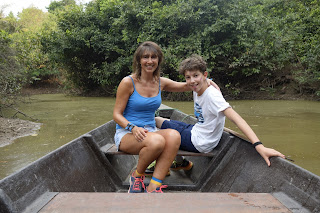 The thrill I experienced as we sailed in a motorboat along a tributary of the Amazon towards our first hotel – the Inkaterra Reserva Amazonica – was huge. I kept pinching myself to believe I was really there, in the middle of remote jungle, far, far away from civilisation as I know it.

We’d heard great reports about the boutique Inkaterra chain of hotels in Peru and particularly loved their eco-friendly credentials. And if you’re going to be in the jungle, you (or at least I) might prefer to do it in style, which is something else that Inkaterra does well!

We loved our wooden cabana which overlooked the river, with its beds draped in mosquito nets and its porch with two hammocks. Gabriel wasted no time hopping into one of them. I imagine that he would have happily stayed glued to his hammock for a whole week, but I pulled him out so that we could go on a twilight river cruise. We spotted the world’s biggest rodent (a capybara) as well as a posse of baby white spectacled caimans. Sailing along the river in the dark, listening to the jungle’s sounds of the night was both eerie and magical rolled into one. 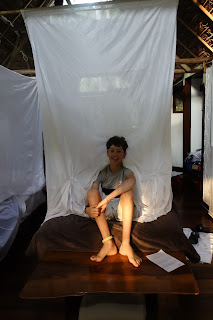 Over the next two days one adventure followed another as we packed in excursion after excursion, all included in the price. There was great camaraderie and banter between fellow guests (we made a lot of friends) and wherever we went we were accompanied by knowledgeable guides who took great delight in having a joke at our expense. Their favourite line was: “Let’s go. The tarantulas are waiting for you.” We trekked through the jungle day and night and yes, we did see tarantulas – very scary for a woman that normally shrieks when she spots a common house spider! The only thing which matched in terms of scariness was seeing a toxic toad – their bites are fatal. Needless to say we steered well clear.

The jungle floor was covered with creepy crawlies, including an army of leaf-carrying ants. There were fire ants too, one of which bit poor Gabriel. Their bites aren’t dangerous, but they REALLY hurt for ten minutes or so. Higher up monkeys hopped from tree to tree, several different species, many of them endangered. And way above the treetops (we followed Inkaterra’s canopy walkway - a series of suspension bridges 30 metres high) countless exotic, brightly –coloured birds soared overhead. 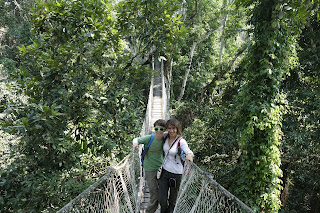 For two days we laughed, we shrieked and we lapped up every second, with other highlights including paddling a native canoe along a lake as the sun set. Oh, and the food. We expected little in terms of jungle cuisine, so it was a pleasant surprise to eat so well. Everything’s made from local produce and my favourite was paiche – a large white-meat fish – which comes served either in a palm leaf or in a spicy stew. Delicious. 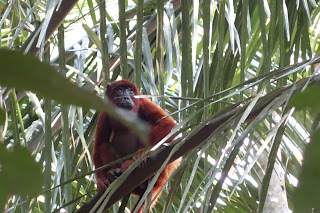 The jungle had been Gabriel’s choice, not mine, but I was so pleased he insisted we go there because it was enthralling from beginning to end. We transferred for our third night to Inkaterra’s smaller hotel in the Amazon – the Hacienda Concepcion – where we slept in a cabana on stilts, went piranha fishing (and caught one would you believe!) and found the plant that viagara is made from in their botanical garden. 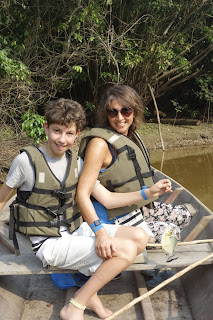 Then we were back on a plane, flying over the Andes to Cusco. To acclimatise to the high altitude we stayed a night in nearby Sacred Valley (which is en route to Machu Picchu) in what can only be described as a dream hotel, the Hacienda Urubamba. Not only is its setting high in the Andes spectacular, so are the hotel’s interiors – think log fires and leather sofas draped with Peruvian rugs and cushions. 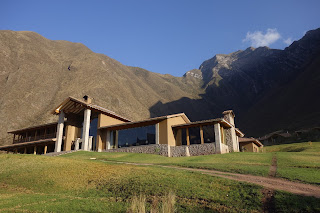 The next morning we breakfasted on sensational quinoa pancakes and afterwards a guide from our tour operator Aracari drove us to Ollantaytambo, where we boarded a train which took us to the town of Agua Calientes, gateway to Machu Picchu.

We dropped our bags off at our hotel (more of which later) and wasted no time in heading up to the ruins of the ancient citadel, otherwise known as the lost Incan City.

Sometimes when you’ve dreamed of something for so long, when it actually happens it can be an anti-climax. Seeing Machu Picchu for the first time, however, was everything I hoped it would be. The magnificence and the improbability of such an advanced city like this being built six hundred years ago at the top of a jagged mountain 2,400 meters high, took our breath away. 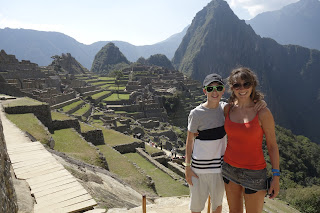 The Incans were geniuses, building walls without cement which endured several centuries and earthquakes. Our guide told us how they worshiped the mountains and sacrificed girls as young as fourteen. Llamas roam free around the ruins and Gabriel had great fun trying to take selfies with them. Needless to say, the llamas did not behave!

The next day our breath was taken away quite literally…on a hike from the ruins of the citadel up to the summit of Machu Picchu Mountain, climbing the original steps carved out of the rock by the Incans. It took two hours (less to get down) but the on-top-of-the world view was worth every ounce of effort.

My only regret was not to have longer to enjoy all there was on offer at our final Inkaterra hotel, the Machu Picchu Pueblo. It was set in glorious cloud forest, with its own orchid garden, bear sanctuary (they rescue the endangered spectacled Andean bears of Paddington Bear fame) and tea plantation.

Oh well, it just gives us a great excuse to go back again…very soon! 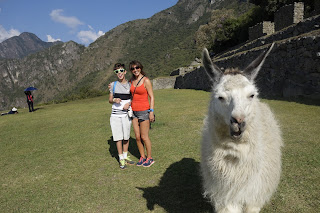 To go back to Jo's website please click on the link below:
www.jokessel.com
Posted by GO WITH JO at 12:16 No comments: